When I was young my mother gave me a copy of a book titled “Donkeys Can't Sleep in Bathtubs and Other Crazy Laws.”  Every state has some silly or outdated laws on the books. Here are some of New Jersey’s. 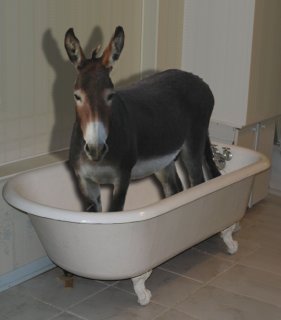 You cannot pump your own gas.

It is against the law for a man to knit during the fishing season.

It is against the law to “frown” at a police officer.

In an attempt to “foster kindness” in the citizens of New Jersey, the month of May is designated “Kindness Awareness Month”.

The third Thursday of October is designated as “New Jersey Credit Union Day” and citizens of the state should observe the day with “appropriate activities and programs”.

Car dealerships are forbidden from opening on Sunday.

You may not slurp your soup.

It is illegal to raise chickens in bottles.

Here are some laws that former Governor Christie took off the books (Bill S1909):

Measures that allowed stallions, bulls and rams to run free at certain times of year.

A law that required debtors to be held separately from prisoners in jail.

Laws forbidding those with venereal diseases from holding certain jobs.

A law requiring a motorist to use an audible warning signal when passing another vehicle on the road.

A measure requiring people to yield a party phone line in an emergency. (Do those even exist anymore?)

A law requiring companies to post signs warning juveniles about the penalties for graffiti in stores that sell spray paint.

A measure that governs how the state treats victims of shipwrecks and the personal property they leave behind.

Lastly, here are some of our favorite out-of-state laws:

— Mississippi law prohibits using profanity in front of two or more people in a public place. Doing so can lead to a 30-day sentence in the county jail.

— New Hampshire residents may not collect seaweed at night.

— New Mexico’s constitution still prevents “idiots” from voting in state elections. There’s no specification for what constitutes an idiot, but in this day and age the jokes basically write themselves.

— West Virginia hunters may not use a ferret in pursuit of their prey. Doing so will nab you a $100 fine and at least 10 days in jail.

— Wisconsin takes its cheese seriously. The state requires certain kinds of cheese to be “highly pleasing,” though there’s no defined punishment if the fromage doesn’t meet one’s gustatory requirements.

— California won’t allow human consumption of a frog that dies during a frog-jumping contest.

— Idaho is the only state to specifically ban cannibalism, except in life-or-death situations. Actually, that one’s okay to leave on the books.

— Maryland prohibits the sale of non-latex condoms in vending machines. The punishment: A fine up to $1,000.

— Massachusetts authorities can fine you up to $100 for dancing to the Star-Spangled Banner.

— Minnesota won’t let residents to attempt to capture a greased or oiled pig; turkeys, too!

— Arizona prohibits feeding garbage to pigs without obtaining a permit, which must be renewed annually.

And, of course, my favorite, Donkeys cannot sleep in bathtubs.

This law was passed in 1924 in response to a specific incident. A rancher in Kingman, AZ had a donkey who developed a habit of sleeping in an abandoned bathtub on his property. At some point, a nearby dam failed and flooded the area, whisking the donkey (in the bathtub) down the valley quite a ways. The townspeople expended more resources to rescue the donkey than they would have liked, and petitioned to have this law passed.